It's November 1998 – both my wife and I are retired and decide to spend three months in the winter sunshine of Spain..... 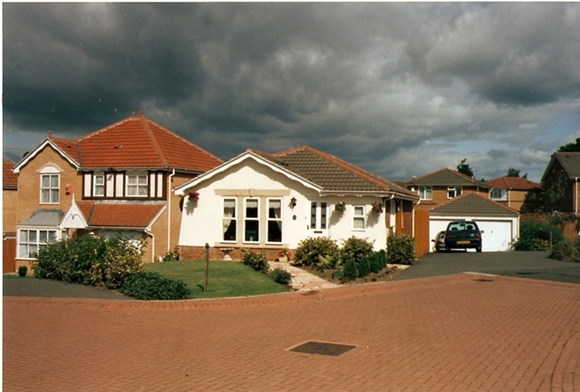 Our house before the move

Where do we start? We had never been to mainland before apart from a cruise ship stop for one day in Vigo, northwest Spain.

Ask around; friends of friends had done it; can we meet up with them?; we can; we do.

Our "informants" had done it all over the past twenty years – the Portuguese coast (west and south), Costa del Sol, Costa Blanca and Costa Brava but advised that if we wanted guaranteed winter sunshine from January to March there was only one place to go – BENIDORM – with it's own micro–climate (although on the east coast of Spain it faces south).

"BENIDORM"? we both exclaimed together – it's reputation being well known to us. But despite that reputation a positive decision was made.

How do we get there? Where do we stay when we do arrive there?

Again our "informants" solve the problem for us by providing

On telephoning the agents we are told they have just one apartment left for January – March 1999. HOLD IT !– is my request.

On telephoning Brittany Ferries (re Portsmouth to Santander route) we are told they have just one cabin left for New Year's Eve – WE'LL BOOK IT – is my response – immediately followed by a call to the letting agent to reserve the apartment in Benidorm.

With great anticipation, excitement and some apprehension we loaded up our small car and set off along the M4 singing "Viva Espana" (well it was the only Spanish song we knew!). It was New Year's Eve 1998.

When we boarded and were shown to our cabin we soon realised why it was the only one left – bottom deck in the bowels of the ship right next door to the ship's clunking engines. BUT being a French ship we celebrated the New Year twice – at English then French time!