Completing on the house

It was late November 2001 when we were viewing the house in La Nucia. We had parked outside on the dirt road, after all it was a building site, and walked over where the pavement would eventually be. The main front door led into the lounge and immediately on the right was a door to the kitchen with a view of the Sierra Helada north of Benidorm. Continuing on through the lounge another door on the right alongside the centrepiece fireplace led into a small bedroom which could double up as an office. Towards the end of the lounge on the left was a large arch leading to the main bedroom and shower room / toilet and some stairs leading down to the lower floor where there were two more bedrooms and a bathroom. A corridor between the bathrooms led to the bottom terrace overlooking the property's own garden and across a wall into the community gardens which at the time was full of building materials. The bottom terrace was situated directly below the terrace to the lounge above. Both faced west and would benefit from the sunrise.

The community would consist of 34 houses  4 blocks of 4 on the side we were on and 2 blocks of nine opposite across the gardens.

We immediately fell in love with the property, the views from the terraces and the situation (15 minutes from the beaches of Benidorm, theme parks and supermarkets and within walking distance of the foothills of the mountains). So, it was time to meet a representative from the building company who turned out to be their lawyer. Despite our trying he wouldn't budge on the asking price of 186,500 euros stating that prices were about to go up as building of the community progressed (only 4 of the 34 were ready at that stage). The currency at the time was pesetas but in view of the impending change to euros on 1st January 2002 I will stick with euros! He did, however, concede to our request to fit an extra door in the lounge effectively blocking out the archway. Our experience in open plan villas had taught us that we needed to retain heat wherever possible on the cold nights of November to March.

We agreed to go ahead. We employed an English speaking lawyer who had been recommended to us by friends. The first things he did for us were to check up on the building company and make sure the site of the community had all the relevant permissions. The results were favourable so on 15th December 2001 we paid a 10% deposit and contracts were signed. Then we just wanted to know when we could move in........

But soon Christmas was upon us and we were expecting visitors to our rented villa in Moraira. Our daughter, son-in-law and granddaughter were due to stay for a few days; so on the day of their arrival we took the opportunity of stopping off at La Nucia to show them the house on the way from Alicante airport. They approved!

The house still under construction 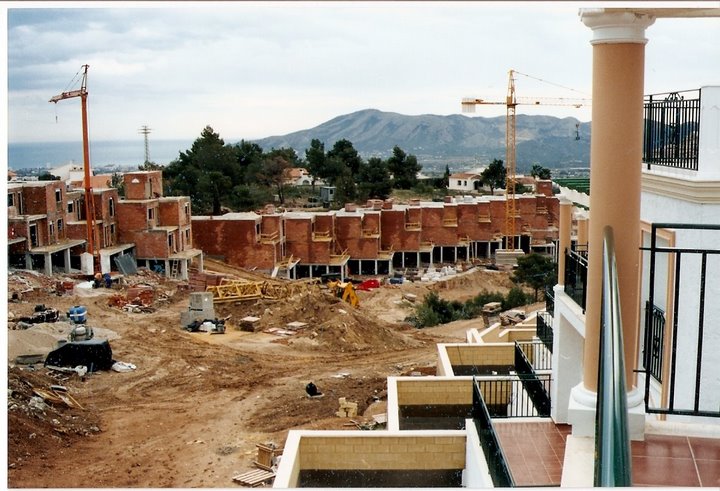 This is the view of the rest of the development

Boxing Day arrived quickly and it was time for them to go. As arranged they drove back in our Laguna to St. Albans, England. We still had not received our NIE numbers to enable us to buy a car so we hired a Clio on a week to week basis. We were then waiting for a new house AND car......