The salesman at the Renault garage rang during the last week of December 2001. He wanted the car that he was holding on our behalf (while we waited for our NIE numbers) to go through their accounting system for 2001 so could we pay for it by the year end? Well, we did and to this day I don't know why!

A new building in Spain has to be inspected by the Local Authority and when they are satisfied all is as it should be a Certificate of Habitation is issued. Only then can water and electricity supplies be connected. As this was some way off we agreed to pay stage payments of 4,250 euros a month until the Certificate was issued  then we could complete the purchase.

Hallelujah!  our NIE numbers were received at the end of January so we were able to collect our new Megane 10 weeks after applying for the NIE and after hiring a car for 5 weeks.

In March the builders let us move our furniture into the property which saved storage fees in South Wales. 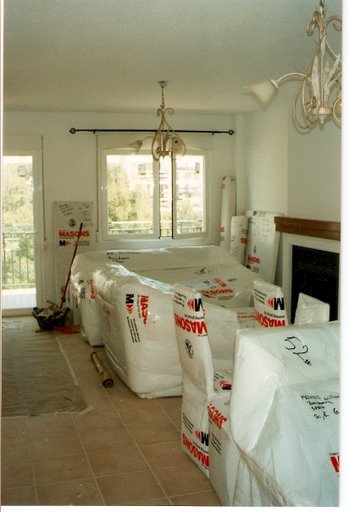 We vacated our villa in Moraira on 30th April 2002 and moved into our new home  the builders very kindly connected us to the water and electricity supplying the site  which saved us paying rent at summer rates in the villa. We continued paying monthly stage payments.

Then in August, the Certificate of Habitation was issued. Early in September we visited the Notary with our lawyer to complete the purchase. (Notaries are responsible for legalising any documents including deeds (escrituras). They are appointed by the Government and are qualified lawyers who have gone on to study to become notaries). Shortly afterwards we had our own water and electricity supplies.

Note: Additional costs from above totalled 17,890 which is 9.6% of purchase price. The books always say add on 10% - they are not far wrong!