The agent called again the following day to show us around and to demonstrate how various appliances worked. 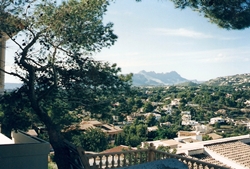 View from villa in Moraira

The property must have been 25 years old, the musty smell indicating it had been empty for some time. The main front door opened into the lounge off which branched an open kitchen and a corridor to the bedrooms (2) and bathroom. Both the kitchen and bathroom showed their age and needed upgrading. Although we were told the cleaners had been in it took my wife 5 days of scrubbing to get the kitchen and utensils to her standard.

The villa was situated in the corner of a large 1,000 sq. metre plot  entered via two large metal gates and a 50 metre driveway. A pool was situated behind the property but would prove too cold for our use. The garden had been landscaped at one time but had become overgrown.

The oven and the heater in the lounge were fuelled by gas. This was our first experience of gas in Spain but we were aware there was no mains supply in the area. Therefore we had to buy gas bottles (bombonas) which were kept in a small housing (casita) outside the lounge connected by piping.

We quickly got used to life in the villa. Although I didn't have to, I spent time pottering in and tidying up the garden. English neighbours (owners) that we met proved to be very friendly and helpful and talked us through their experiences of moving to Spain. We were also introduced to their walking group  COWS  the Carry On Walking Society  with whom we discovered many parts of the Moraira/Teulada/Jalon/Javea area that we would not have otherwise seen.

One of the walks that sticks out in our minds took place on 10th December 2000, a Sunday. About twelve of us followed a coastal path south of Javier taking us to a headland looking out across the sea from where you could just about make out the outline of Ibiza in the distance. We walked back to the car and unpacked for a picnic on the pebbled beach of Portixol, a small fishing cove. 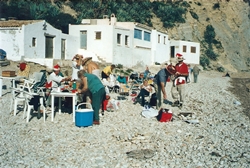 Walks on South Beach of Javea

Firstly we sat and watched fascinated by the old fishermen breaking open and eating sea urchins! Next we collected driftwood and started building fires in the pebbles. As I wasn't one of the drivers I had a wonderful time barbecuing on the shore while the wine flowed - then eating mince pies as we sang Christmas carols. It was one of the occasions that I'm sure could never be repeated. 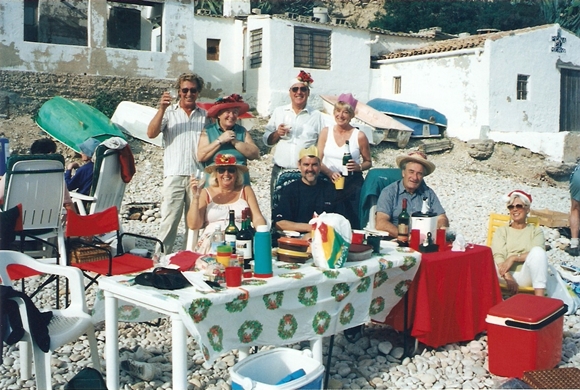 Barbeque on South Beach of Javea

Our bedroom was situated on the north side of the villa under the hang of pine trees. As very little sun could penetrate and there was no internal heating the walls were very cold. Consequently we learned another lesson  the downside of Spanish properties  condensation - which built up in the bedroom and then started to turn black. It was so bad we had to move to another room and have the decorators in.

Christmas Day was very sad again  we had a conventional dinner for two at a cafe in Calpe and we spent New Year's Eve alone also staying in to see the celebrations on TV. BUT with the onset of 2001 my views of moving to Spain were changing  it was time for a chat with my wife!!